On the morning of September 11th, 2016, I stood in the hallway chatting with my friend and next-door teacher neighbor, JaNhea Stephens. We both enjoy listening to NPR on the morning commute during those pre-dawn hours sipping coffee (for me) and Coke (for her) to ensure lucidity before arriving to school. That morning, I opted instead for some loud Top 40 tunes, hoping the musical stylings of Justin Timberlake would wake me. JaNhea, though, listened to StoryCorps and recounted to me the experience of Vaughn Allex, a security agent in the Dulles airport who had two of the terrorists on his manifest that morning. His story, and JaNhea’s retelling of it, struck me. I had to share this with the students. I used my first hour planning that day to listen to StoryCorps and rework my lesson plans. I was right–they were moved. So moved, in fact, that they suggested we write letters of empathy and compassion to Mr. Allex. And so we did. I’ve been posting about our experience and reaction to his story on Twitter for a few weeks, alerting StoryCorps to the package of letters coming their way. In return, we received a letter back from Mr. Allex. His powerful message advised the students to connect to each other–to know that when someone is hurting, we need to speak up. He told the students to say something, almost anything. Anything is better than silence. Indeed, the world is small. High school students visibly moved by the words of a man in Virginia, and he by them. Words have tremendous power. 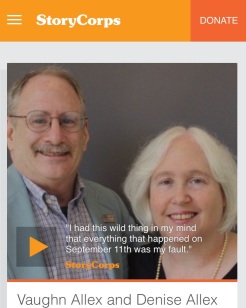 One thought on “The world is small”